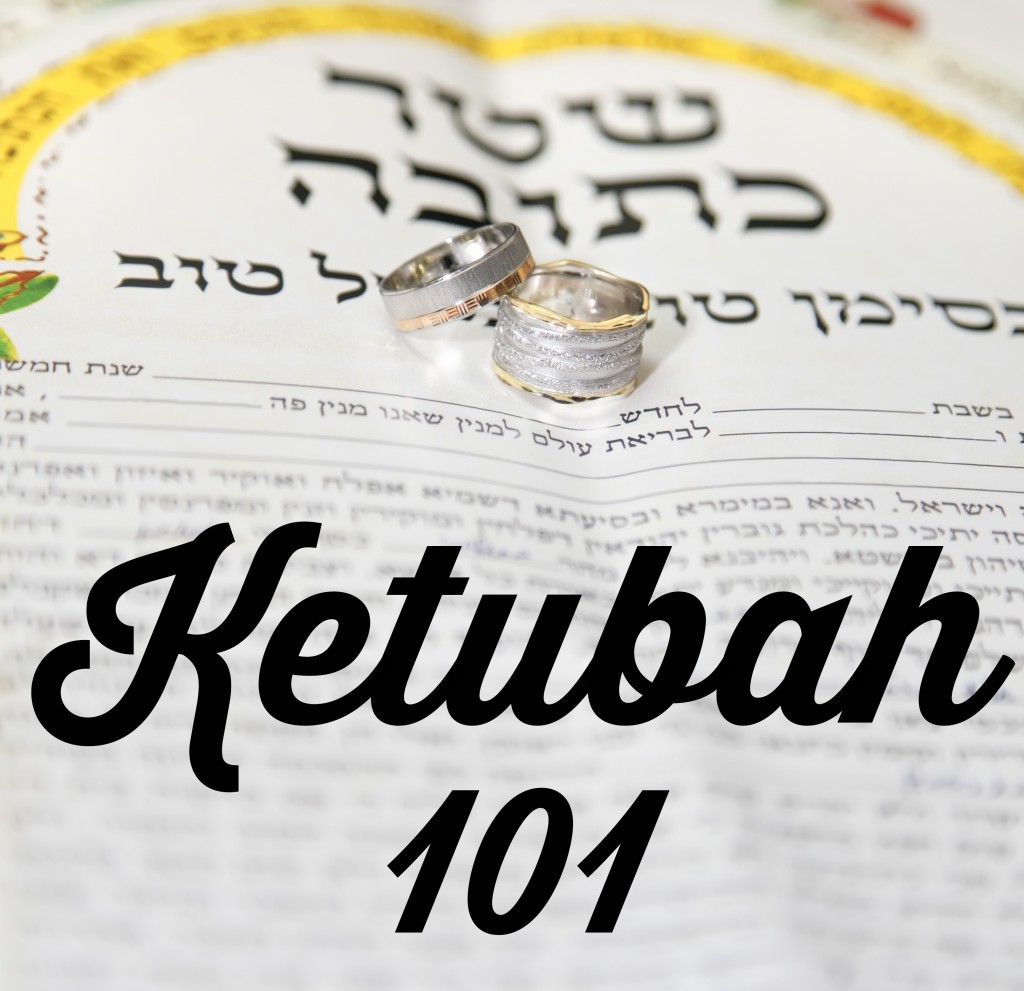 The ketubah, a Jewish wedding contract, is one of the most important components of a traditional Jewish marriage. A remnant of ancient times, the ketubah was originally a progressive document, established in order to protect the rights of the bride. Written in Aramaic, not Hebrew, it describes the legal responsibilities of the groom. These duties include providing clothing and food; as a legal document, the traditional ketubah does not allude to love.

Once signed, the contract belongs to the bride to ensure her husband respects his responsibilities. It also makes divorce harder (and more costly) to enact.

Although ketubah texts have changed slightly throughout the centuries, the version used in traditional Jewish marriages today still shares a great resemblance to the original ketubahs signed in the first century CE. 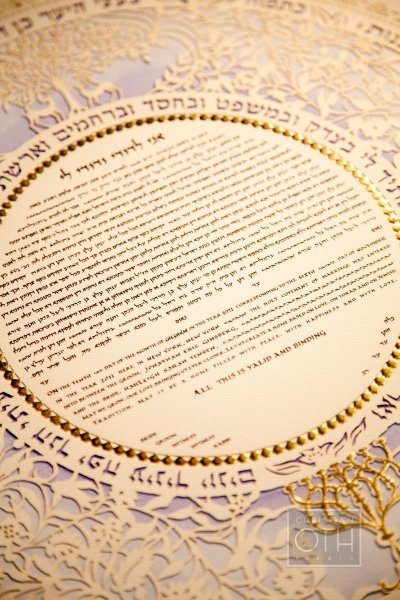 Nowadays, Jewish couples have a number of options when choosing ketubah texts. Depending on your traditions, you may decide to pick an Orthodox, Conservative, Reform or Humanistic ketubah text. There are ketubahs written in Aramaic, a mix of Aramaic and English, Hebrew and English, and English only. Ketubahs can even be secular or written specifically for interfaith or LGBT couples. Newer texts tend to focus on the emotional commitment the couple is making, including words such as “love” and “devotion.” Newer texts are also more egalitarian; unlike traditional texts, they focus on the groom’s and the bride’s responsibilities.

You and your future spouse should think very carefully about the contract you intend to sign. Wish you had more choices? Can’t find a text you both identify with? Consider writing your own. Many ketubah companies allow you to customize existing texts or write your own document that truly codifies the commitment you both wish to make.

Couples who embrace egalitarian forms of Judaism may wish to also include the Lieberman Clause, an additional paragraph introduced by the Conservative movement. When the Lieberman Clause is included in the ketubah, the husband no longer has the right to refuse a get, a Jewish bill of divorce, and prevent the wife from remarrying. 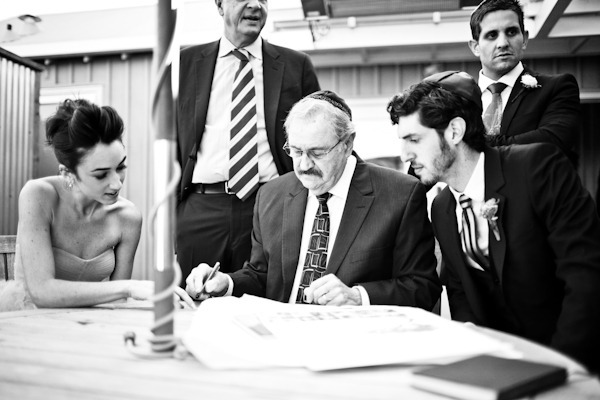 The Art Of Love

There are literally thousand of ketubah designs to choose from. Historically, ketubot were designed according to the era and region. Nowadays, choices include circular, paper cut, printed or hand-painted ketubahs. If you don’t see one that resonates with you, you can even commission an original ketubah that reflects your unique aesthetic.

Many couples also choose to include a quote from the Song of Songs, a section of the Torah celebrating love. Popular choices include Ani L’Dodi, v’Dodi Li, or “I am my beloved’s and my beloved is mine”  and Matzati et Sheahava Nafshi, or “I have found the one in whom my soul delights.” Ketubah designs can prominently feature the quote of your choice.

Newlyweds often hang their ketubah on their bedroom wall or in a private area of their new home. It not only serves as a reminder of the commitment you made on your wedding day, but it also is a beautiful piece of art you both will enjoy in the years to come. 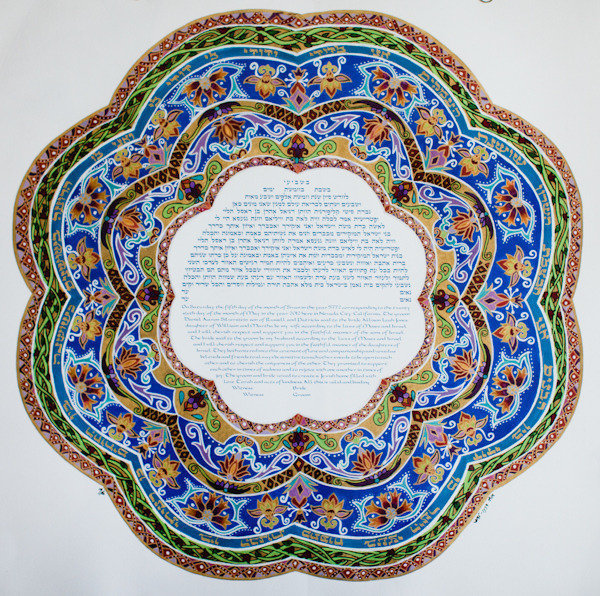 The ketubah is signed before the actual wedding ceremony. Depending on your traditions, most couples choose to sign the ketubah privately, surrounded only by close family members. Most ketubahs include lines for at least five signatures: the groom, the bride, the officiant, and two witnesses.

Take the time to choose your witnesses carefully. This is one of the highest honors you can give and these signatures will be prominently displayed on your ketubah forever. According to Jewish law, your ketubah signers should be male, Jewish and unrelated to the bride or groom. More liberal denominations also allow witnesses to be female. 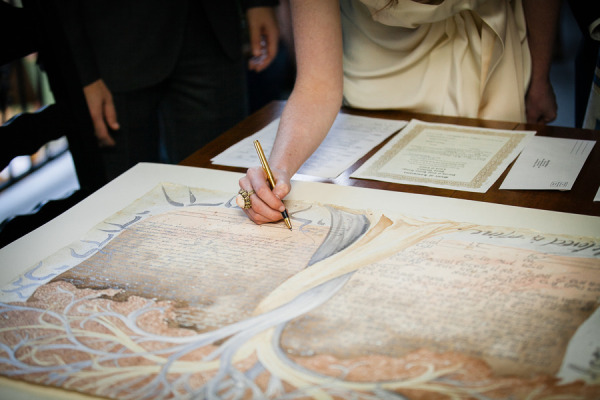 We recommend ordering your ketubah at least 3 months in advance to allow time for editing, proofing, printing and shipping. Once you pick out your ketubah, your wedding is just around the corner!

Check out our 7 Tips For the Perfect Ketubah here!